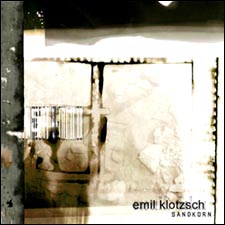 Despite the glut of mangled beats and click/glitch sound emerging from Germany on a daily basis, few manage to reveal something soulful and engaging like this debut from Cologne's Emil Klotzsch. He infuses electronics with recorded instruments that often seems to take an equally obscured touch by the computer. And somehow.. underneath all the schizophrenia of sound - a solidly melodic, mature, and flowing experience is delivered.

As much a collagist as he is a song writer - Sandkorn features guest musicians Malte Weuste (trumpet) + Dominik Böhringer (violin) on 'fanfarel' and lends his own vocals to the lush 'everywhere is shut'. It doesnt stop there though, this release is anything but just another tricked out electronic self-indulgence fest.

This release was accompanied by an art series by Adrian Leverkuhn, you can view the gallery here (requires flash).

Reviewer: fruktos - favoritefavoritefavoritefavoritefavorite - April 3, 2006
Subject: stamfkorn
In hindsight, this is probably my second favorite release of 2005. Everywhere is Shut is great, sure, but theres much more here in terms of sonics, sounds, squeeky funk, instrumentation and more. As usual, One drops unique talent on us with names that are either unknown or well known.

Emil belongs in the first group, but this probably won't be for the longest time, this is already a great start and a good place to do it. Not only that, but he has a killer new ambient release over @ autoplate, a proper place with the proper traffic for such an elaborate ambient undertaking (if you got to choose to release out of 2 netlabels which 2 would you pick? emil is easily impressing all the right people). Check my review @ autoplates pages for more on that though.